What To Do In Baku

“Big cities seem to me like destinations, walled-in stopping places, with nothing beyond their monumental look of finality breathing `You´ve arrived´ to the traveller.” – Paul Theroux

Baku wasn’t in my plan. It was my back up. I wanted to go to Turkmenistan but about a week before I was due in in Ashgabat the authorities denied me a visa. Again. Turned out they denied a whole lot of people visas. Again. I really wasn’t ready for Baku. Turned out it didn´t matter. I had arrived in Baku and Baku was ready for me. 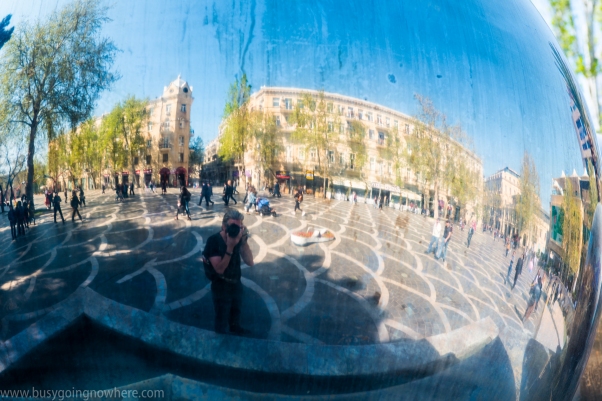 The main square in Baku 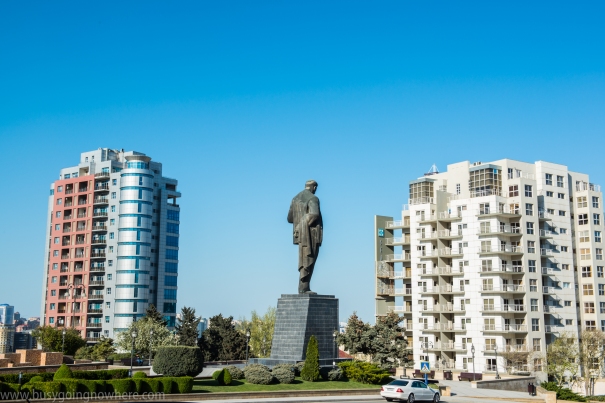 Statues larger than life. Here stands Neriman Nerimanov and look out over the city. 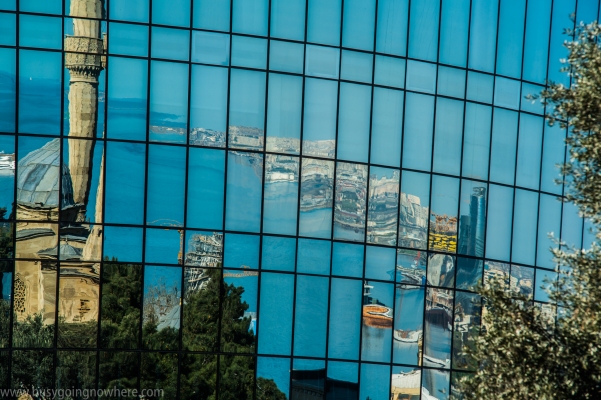 Baku reflected in one of the Flame towers 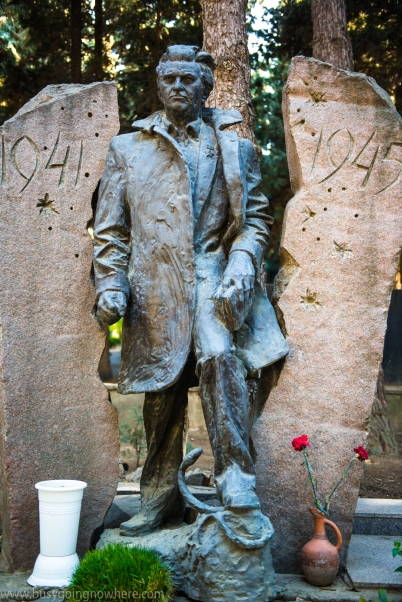 Situated on the banks of the western coast of the Caspian Sea, Baku is perfect for a weekend, long or short. A longer one gives you the possibility to get out of the city, a shorter one still allows you time to see everything you want to see. The beauty with this city of over two million people (three in the greater area) is that there aren’t too many things you “have to” see. The old town – a UNESCO World Heritage Site – is a must-see with the Maiden tower as the shining star. The walk along the waterfront of course, especially at night, is another must-do. Most of the crazy architecture is in the city center, which makes it easy to see them. The exception is the Heydar Aliyev Center located further out. But it´s an easy metro ride or a half-hour walk. The History Museum was worth the money and the visit, although it´s a bit sketchy on which artifact goes with what story. Many artifacts are also mended and done so in a fairly crude way. 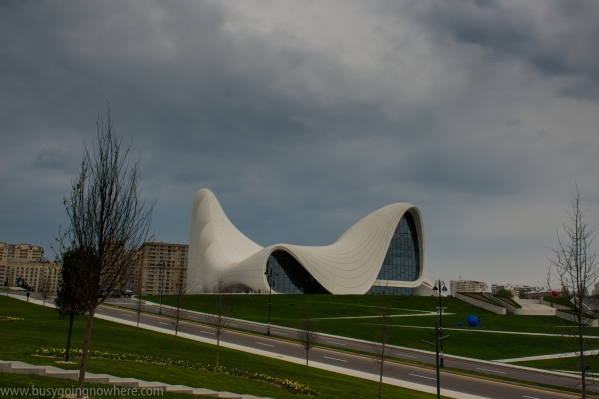 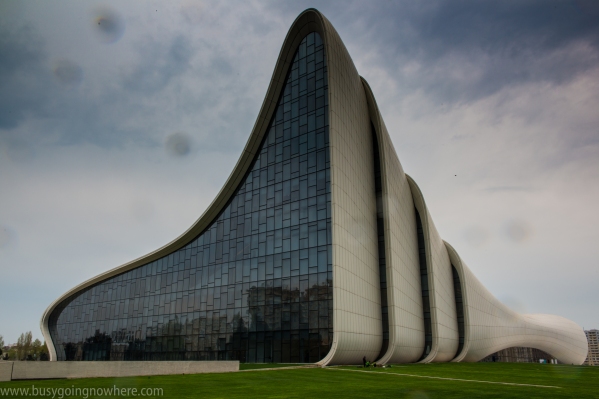 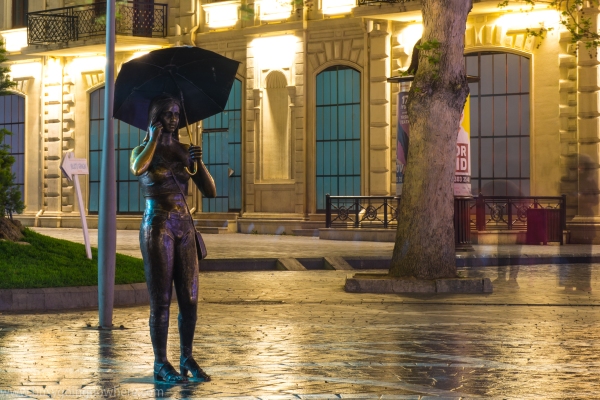 Statue of a girl in a top and shorts, talking on a phone. Very Baku. 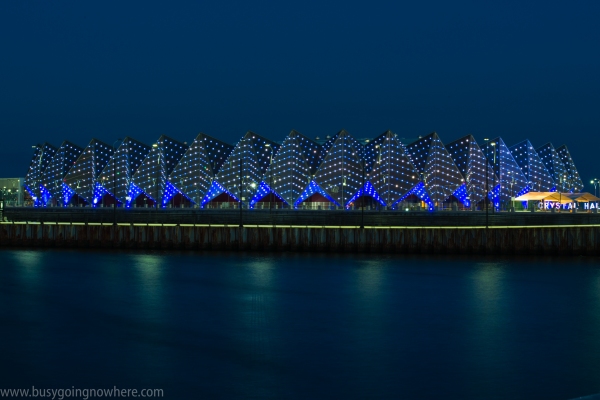 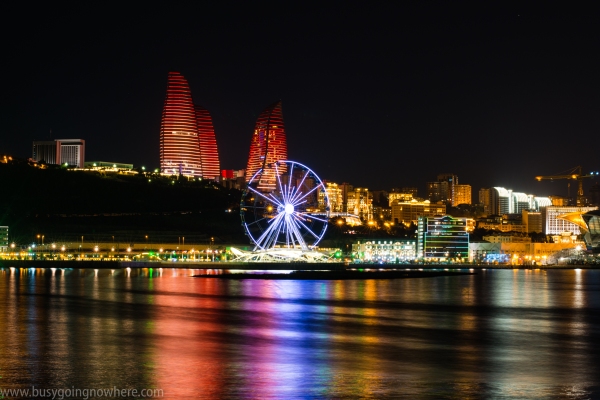 All in all, I loved Baku. I walked and hanged around the city for four full days (and nights) and I had a great time. Good shopping, great bars and restaurants, nice atmosphere and an architectural design that´s out of this world. The traffic situation is not bad at all, and cars here stop when you step out on to the street. People will help you if you ask or look a bit too lost. There is a tourist information, and in theory they can do a lot of things. But as Lonely Planet also concluded, mostly they give you maps and information with glossy covers.

However, the visit to the History museum brings me to the only negative part with my days in Baku. The national narrative of the Azerbaijan nation is that almost everything bad is the fault of the Armenians. If it, for some reason, isn’t (or wasn’t) the Armenian´s fault be sure it was Moscow´s. I would like to say I´m exaggerating but the information boards in the museum time after time ended in the same conclusion – with blaming the Armenians. The few discussions I had with local Azerbaijanis who spoke English well enough ended the same way. It does get a bit tiresome to read and hear how bad the Armenians are or have been. This line of reasoning removes all responsibility on behalf of the leaders or of people of Azerbaijan. Time after time, they claim they are the victims. It may be so, but then they are also saying that they are not the least responsible for any of the bad things that happened in their own history. Must be very comforting…

Getting to Baku and away is easy enough. Several airlines fly in and out of Baku at reasonable prices, and it´s just an easy day´s travel. The airport is just 20 – 30 minutes out of the city. Midranged hotels go for about USD50 a night, but of course there are cheaper, more expensive and Airbnb. Food is cheap and it´s easy to get a beer at the local pubs for one single dollar. Yes, local beer is good. Or you can head down to the expat bars (English, Irish and Hard Rock café) and pay five times more (USD5).